Presents for Germany´s inhabitants: on Christmas Day, 25th December 1952, television broadcasting officially recommenced for the first time since the end of the Second World War. The following day also saw the first broadcast of the "Tagesschau" news programme.
Very few people were able to witness the birth of German television, however. Only some 4,000 television sets at a price of 1,150 DM had been sold by then. Hardly anyone could afford to buy one.

Stuttgart lacked a television transmitter. Reception was mediocre and only possible in higher regions or with the aid of special aerials. When the coronation of Britain«s Queen Elisabeth II was broadcast on television in June 1953, most of Stuttgart«s inhabitants didn«t have the pleasure of watching it. It was feared that there would be even more dissatisfied customers a year later with the start of the World Football Championship in Switzerland. Distributors were also complaining that they couldn't sell TV sets when there was no transmitter. By that time prices had dropped and more people were interested in owning a set.

The Süddeutscher Rundfunk had long since planned to address the problem. The hill known as the High Bopser, 483 metres above the Stuttgart valley basin, proved to be a favourable site for a TV transmitter. From here the broadcasting company could guarantee good reception in all the valleys in the state. 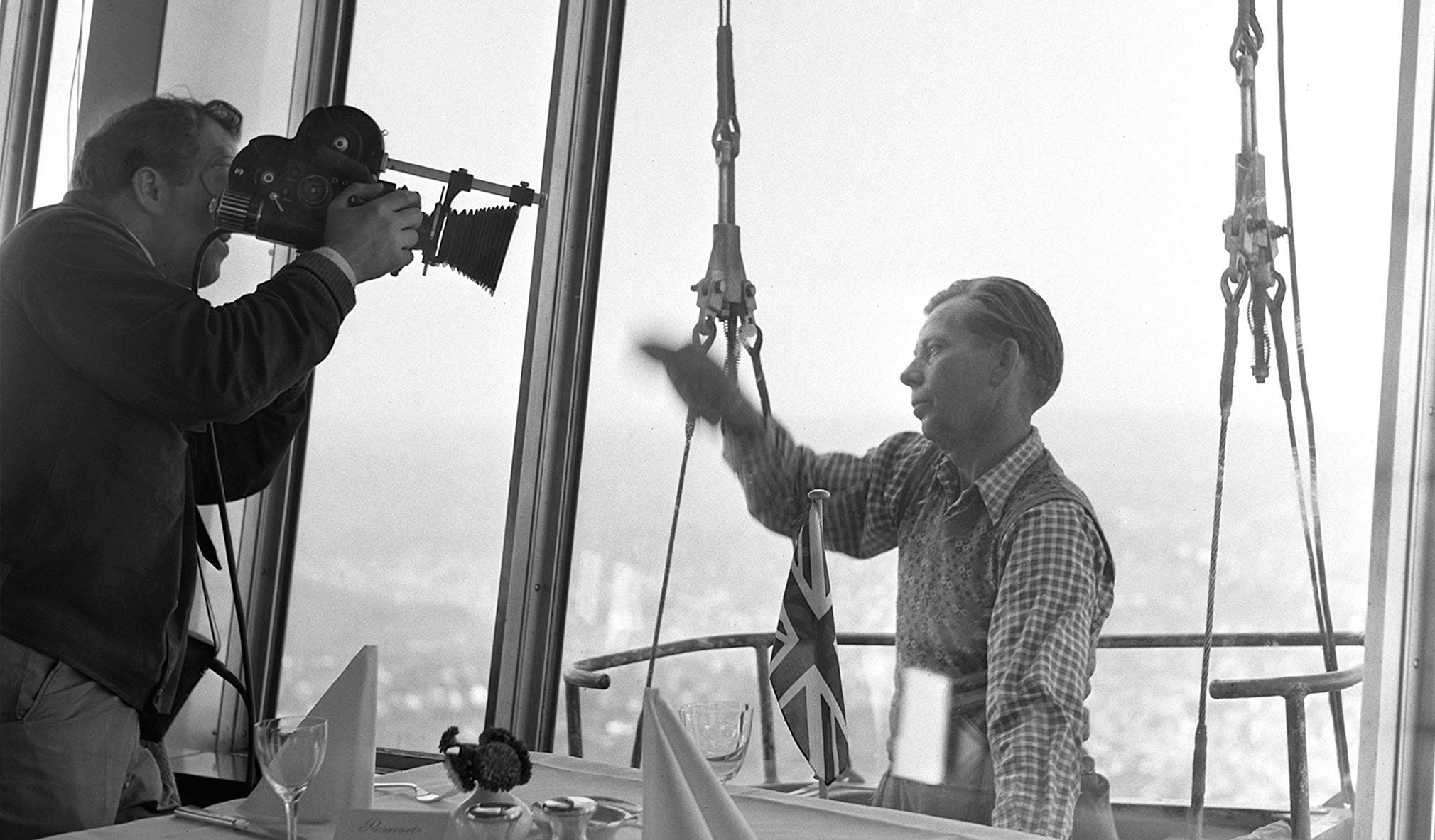 Originally it was planned to build a 200-metre-high steel lattice mast. It was to cost some 200,000 DM and reach completion by the late summer of 1954. Fritz Leonhardt, the state architect and advisory engineer for bridges and structural engineering, heard of the plans by chance. In his opinion, a lattice mast would be a blot on Stuttgart´s landscape in this elevated location. He was able to gain the enthusiastic support of Helmut Rupp, the SDR´s Technical Director, Fritz Eberhard, its Director General, and Friedrich Müller, its Administrative Director, for his vision of building a tower with an observation deck and café instead of a purely functional construction.

The controversial project took its course. Some members of Stuttgart's town council feared a financial disaster. After months of negotiations with the city, the SDR's board of directors decided in May 1954 to finance the Television Tower on its own and commence building without further ado. On 10th June the bulldozers rolled up. The Tower was completed in only 20 months in accordance with Leonhardt's plans. Its artistic and technical director was the architect Erwin Heinle. The estimated cost of construction was around 1.7 million DM. There were protests on the part of Stuttgart's citizens when the Tower became visible from all directions, protruding high above the treetops. Letters to the press described it as a monumental blunder, an eyesore, and completely out of place in the beautiful wooded landscape.

There were protests on the part of Stuttgart«s citizens when the Tower became visible from all directions, protruding high above the treetops. Letters to the press described it as a monumental blunder, an eyesore, and completely out of place in the beautiful wooded landscape.

No reception in time for the World Football Championship

The Tower was not finished in time for the World Football Championship in 1954. The SDR was able to begin broadcasting on 29th October 1955, i.e. prior to the Tower's official inauguration. Poor reception in the Greater Stuttgart area was now a thing of the past.

The Tower through the years

By the time of the Tower's inauguration in 1956, the overall cost of building had reached 4.2 million DM. Over the following 53 years, renovations became repeatedly necessary which greatly exceeded the original cost of construction. Between 1979 and 1983 11 million DM were invested in the modernisation of the elevator systems, the power supply, the air-conditioning and the kitchens.

The latest and most complicated renovation work was carried out from April to November 2005. After 50 years the outer skin of the pod was in urgent need of replacement. For the first time, the Tower was closed for several months.

Many technical improvements have also been installed in the Television Tower, mainly for safety purposes. They include, for example, the smoke extraction system from 2005. The ventilation, heating and sprinkler systems have also been renewed several times.

The Television Tower is no longer a tower for television

At present the television antennas are not in use. They are no longer suitable for the frequency range or for terrestrial television (DVB-T standard). The steel lattice mast would have had to undergo extensive modification. Since July 2006, therefore, the ARD's Channel One is no longer broadcast from the Television Tower, but from the nearby Telekom telecommunication tower.

Radio programmes have been transmitted from the Television Tower since May 1956. The VHF transmitter antenna was replaced for the first time in 1981 and again in 2000, owing to a defect. In 1988 the development of digital audio broadcasting (DAB) began. A more efficient DAB antenna with better performance was installed on the mast in the year 2000.